Share |
First blog update in ages.....I really should make some time for writing here more often. OK....so, we decided to do Southern California for our family summer vacation, again. Why? Because we loved last year's trip. The itinerary is mostly the same but, with some different stops on the road to and from Tx to Ca. We left the house a little before 9am and were making good time until I had an unplanned conversation with the Tx DPS. My speed was not too bad but it did get me pulled over. I got really lucky to get off with a warning. The officer was actually very polite, considering it was the last day of the month and, you know, the whole quota deal. Our first tourist stop was Roswell, NM. Several years ago I got very interested in the Roswell story. Even with a completely open mind I quickly came to the obvious conclusion that nothing from outer space landed there. We killed about 45 minutes going through the UFO Museum and a couple of UFO gift shops. Dianna and I had some good laughs and the girls were completely bored. 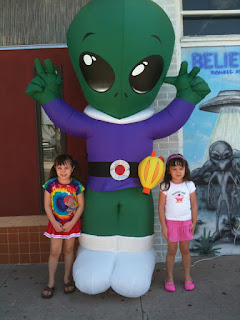 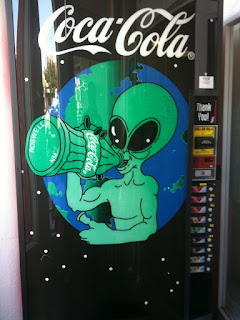 Even Coca-Cola is pushing the alien.
Looks like Coke wants to let you know
that aliens get buff drinking some Coke.

Next stop was Ruidoso. This is the only mountain area I had not visited in New Mexico. It probably ranks after the Taos area but, definitely before Cloudcroft. I had previously read about Monjeau Lookout Tower and the views from atop of the mountain. I also read some disclaimers about the 5 mile steep, dirt road to get to the top. Well, with some anxiety from the girls we made it to the top pushing the limits of a Honda Odyssey. I don't think this qualifies as a hike since we only traveled about 200 yards on foot with an elevation change of about 50 feet. This dirt road excursion was well worth it but, unfortunately we cut the visit at the top short since a thunderstorm was moving in on us.

Next time I will definitely take video in landscape mode. 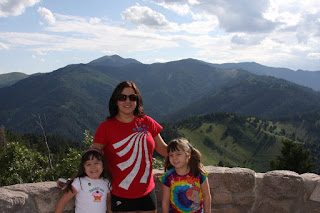 View from Monjeau toward Ski Apache 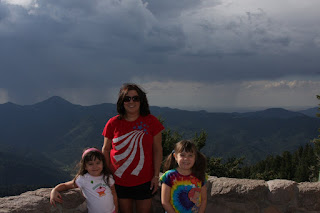 View from Monjeau toward the looming storm 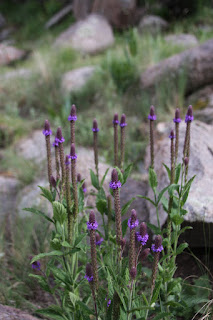 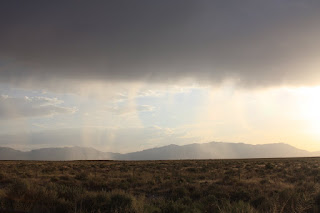 If you look closely you can actually see
the rain dropping from the sky.
White Sands Missile Range 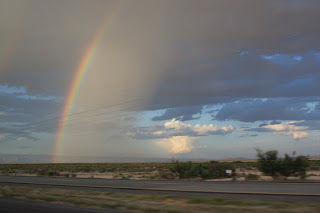 Taken "free-handed," through the driver's side
window, traveling 75 mph near White Sands, NM

We ended the day with a stay in Las Cruces, NM. Next stop is photo shoot of some very cool boulder formations in Texas Canyon, AZ
Posted by ferny at 11:40 PM 0 comments