Share |
Saturday night I was putting trash into the garbage bins in the garage. I actually took the long way around by going out the front door...as I finished entering the code into the key pad to open the garage door I saw a opossum scurry into the garage. For about the last 5 weeks we have noticed the cat food bowls in the garage were just about empty every morning. Everyone originally thought there was a stray cat eating the food. Dianna's brother said he saw what looked like a cat when he was house sitting for us on our trip to New Mexico. Here's a picture of the real culprit: 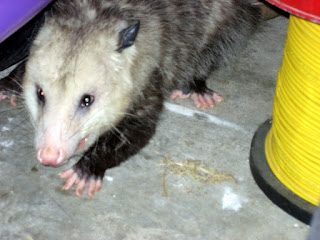 This is a opossum, not to be confused with a possum.

So, Sunday morning I went to a friends house to get a live trap and some opossum catching advice (stangely, he just had a opossum problem, too). I waited until the SuperBowl was over (Arizona should have won!) because we had friends over for the game and I didn't want to deal with the marsupial during the game. After the game ended I went out into the garage only to find this: 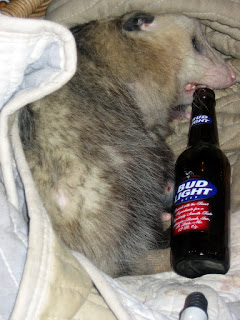 The "home invader" stealing my beer

Beer is expensive these days and I really enjoy my Bud Light so, I attempted to take back my beer. Here's what happened as I approached the furry creature: 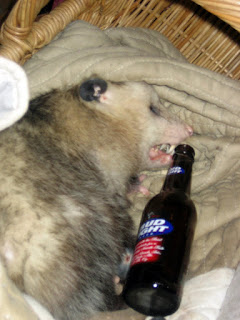 The "home invader" growling and showing me his incisors

So, I just decided to share my wonderful bottled brew with the nasty furball. When I finished I picked up the basket he was lounging in and tried to "stuff" him into the live trap. Dumb move....he quickly darted back into our garage. I gave it a tap on the head with a paint roller extension handle. I guess he didn't like that because left walking toward the street. He went straight to a curb gutter where he peered over the edge and decided not to go in. I approached him with the live trap which I had quickly baited with some apples slices topped with caramel sauce. It suddenly decided to jump into the gutter.....I don't really know if this was smart or dumb. There is no way for him to climb back up to street level.

One more thing.......the "home invader" had a small offspring tagging along. So, here is the little one's destiny: 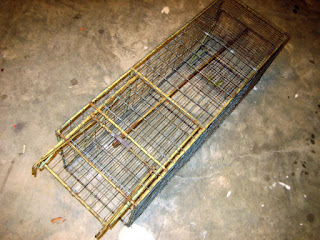 The live trap is baited and set....

He's going to come back, even if you remove the food.

I heard the Budweiser clydesdales were laid off today....so, I will be sending Mr. Anheuser Busch this critter's resume. I think he'll work for free beer.