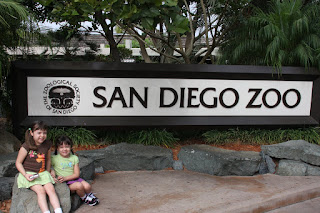 Wow, that was a busy, busy day.

First up was the San Diego Zoo. We purchased the Southern California CityPass again. This gets us into the San Diego Zoo, Sea World, Universal Studios, and 2 days at Disneyland. Also included are small perks such as the SD Zoo bus tour. This was about 35 minute tour that went through 80% of the zoo on a double-decker open bus. The tour gives you a good idea of what animals are actually out and about. Last year we went to see the polar bears but, they were not out...disappointing not just because we all wanted to see them but, we made the long trek to their corner of the park. Taking the tour we knew not visit the polar bears because there were not out and about, again.

After the tour we headed toward the koalas. The girls thought they were very, very cute. I thought it was possible someone put stuffed koalas from the gift shop into some Eucalyptus trees because these guys didn't move, at all. 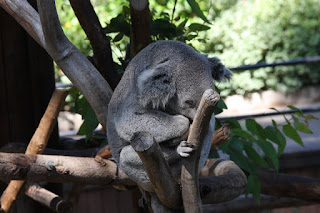 Lazy Koala
Now we were off to see the panda exhibit. On the way we stopped to see the giraffes and bears. 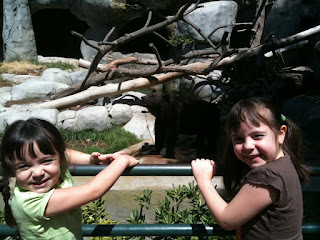 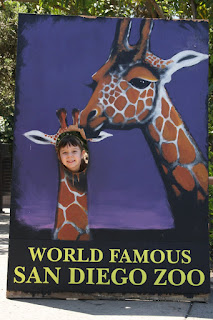 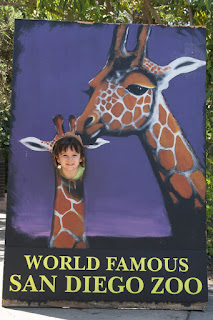 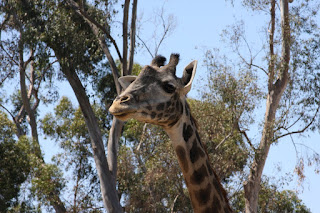 OK, not so mystery giraffe #3
The pandas are the highlight of the zoo....there is usually a long line/wait to get into the exhibit. In fact, once you get in the exhibit the zoo workers keep the line moving by only giving you a couple of minutes of panda watching bliss. The pandas were in sleep mode for this visit, just like the koalas. One of the pandas is expecting this month; she was not in the public exhibit, though. 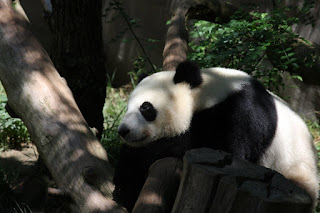 Lazy panda
The girls were starting to act up a bit by now and they were not listening to us for the most part so, I came up with a reward system called Disney points. When they start acting up I just say "Don't lose Disney points." This will work great, of course, until we are through with Disney anyways.

By now it was time to make our way back to the front of the park, we skipped all of the smaller hooved type animals like the gazelle and antelope, etc. Dianna calls them "junk" animals; as in filler for the zoo. She came up with this term after visiting Fossil Rim in Glen Rose....it is full of filler animals.

We took the 'big cat trail' on the way back. We saw a snow leopard, they were at the very back of the exhibit but, still very cool nonetheless. We also saw a black jaguar that paced three feet in front of us. We have a small black cat so, it was an interesting contrast. 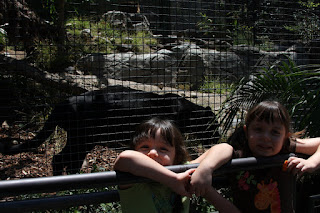 This black jaguar was a monster, much
bigger than our little "Mocha"
At the front of the park the girls went through a reptile house, "M" is really into turtles right now. From there we rode the Skyfari, which is a tram that takes you from one side of the park to the other. "A" calls this 'skyride' and it's one of her favorites.


My iPhone videography skills are definitely not good and, this vid turned out to be somewhat boring compared to the actual experience.

I lost my favorite hat at the zoo....was probably more disappointed that I lost something than actually losing the hat.

Next on the agenda was the Del Mar Racetrack. To save time on the way there we decided to get some fast food. Not knowing the area very well the only place convenient we found was McDonald's. Those of you who know us well know that we hate McDonald's. In fact, the only fast food we will eat is Whataburger or Chick-Fil-A. Of course, the girls kept asking why are we stopping at McDonald's....girls got Happy Meals and Dianna and I got Big Macs. Wow, how does that place stay in business? Not good food. Probably would have been better off eating at the track but, we were only getting general admission tickets (no seats) and, the food had the possibility not being any better the McD's and costing 2-3 times more.

Finally arrived at the track and had to park in the auxiliary lot. This is not bad on the way in since they provide a shuttle but, they stop running it after the 8th race. We were leaving after the 8th race (it was the feature $250,000 San Diego Handicap). 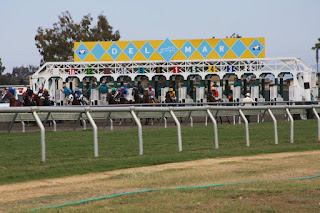 Here's a shot I took of horses come out of the gate
at the backside of the track....this was a 5 1/2 furlong sprint.
Sundays at Del Mar the infield is setup with all sorts of kids activities. The girls, including Dianna, love to see horse racing but, are very bored during the 30 minutes between races. The infield activities provided good entertainment for them. The rode ponies and played on bounce house stuff. My wagering was successful at first, but slowly I started to lose more than I was betting each race and the days tally was minus $65. Good fun. It was good to see quality horses again vs. some of the dogs they are starting to run out at Lone Star Park. Quality horse racing in Texas is in deep trouble. After the 8th race we made the long walk back to our car and headed over to Tony Jacal's in Solana Beach for some fine Californian Mexican food.

The food and margarita's were great. 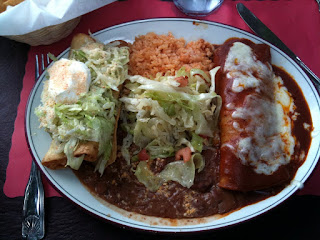 My plate consisted of a turkey flautas and a
beef enchilada. Outstanding. 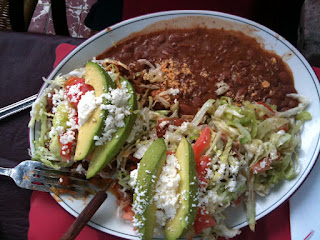 Dianna's plate of Beef Sopas, the Sopas were buried
under the avocado, cojita cheese and lettuce. 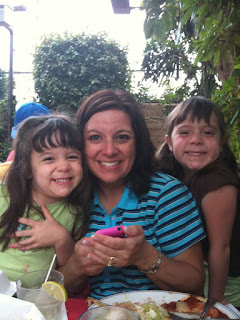 When we arrived back at the hotel we walked up the shoreline trail next to our hotel. A great first full day in San Diego.
Posted by ferny at 8:40 AM

Good morning Ferny, I just stopped by to check out your latest posts; I thoroghly enjoyed them. Thanks for sharing your life with me and the world. By the way, I finally created my blog site; daviel55.blogspot.com. I have yet to post a blog and haven't fully updated my profile; to say the least, my life is extremely busy. I can't wait to get started. I'll catch you later. My love to you and yours...a big hug for your mom and dad. God bless, Dave