Share |
The next couple of days were spent at La Jolla Shores Beach. We had a blast at the beach...D got some serious sunburn on her shoulders, as usual.

Both of the girls really got the hang of the Boogie Board on the first day. Here's M on the board with her sister cheering her on....
Here's A on the board....
Both of them were having blast in the sand and the water. M decided she had enough when I spotted a jellyfish floating about 10 feet from us; and, then an unidentified fish that was about 20-24 inches scared the crap out of me (which scared M). A went back out into the water with me later and a seal swam right by us.
Here they are taking a break from the sun.... 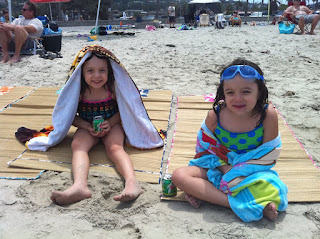 We packed lunches both days. After leaving the beach we made stops at the hotel pool both days....the girls have lots of energy and wanted to keep going. Our hotel, Homewood Suites-Liberty Station is awesome. Monday thru Thursday they have an evening reception which includes dinner and beer/wine. On Monday night I took advantage of the draught beer before walking across the parking lot to Oggis Pizza and Brewing Company. For some unexplainable reason I ordered a pitcher of their Torrey Pines IPA....bad move as I left half of the pitcher - it was very hoppy. Maybe I just had too many beers from the hotel. Anyways we had a couple of appetizers and walked back to the hotel.
We hit the beach the next day - about 100 meters south of the spot from the previous day. By the end of the day D and I were both exhausted....but, the girls still wanted play at the pool when we arrived back at the hotel. About 45 minutes of pool time it was time to get ready for dinner. D stayed in the lounger by the pool and looked up Mexican restaurants on her phone. It really is hard to find non-taqueria mexican food restaurants in San Diego and, after our recent taqueria experience with the kids I really wanted something not like that. D decided that Casa de Loma looked promising after reading about it on yelp.com. It was very close the hotel and sounded good. The entrance was on a main road with parking behind the building. When walked up the door was open and there was not one single person eating here....hmmm, not a good sign so we left. This threw everyone for a loop - what to eat now? After our second beach/pool day we were tired and hungry. Everyone but M agreed to grab a quick bite at the world's greatest hamburger spot - In-and-Out. M just about threw a fit to get some pizza. We caved and got her mini pizza to go from Chuck E. Cheese which was in the same parking lot as In-and-Out. She ate her pizza at In-and-Out while the rest had burgers. Looking back on this I think M had the right idea....not that In-and-Out was a bad idea....we should have made one more trip to Pizza Nova because there would be other In-and-Out opportunities in LA and Las Vegas.
Later that evening I walked over from our hotel to Los Primos Mexican Restaurant (a taqueria style place) to get an Orange Bang. What is an Orange Bang you ask? Well, if you've ever had an Orange Julius that's pretty much the same thing. This place also Horchata, Jamica, Tamarindo and Pina drinks. For $2 I got a 32oz drink....couldn't finish it, though. 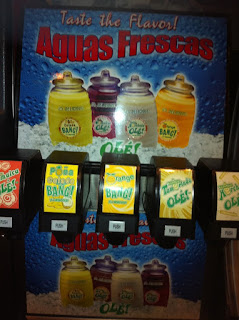