Share |
After waking up and eating breakfast at the hotel we headed up the bayside trail for about a 1/2 mile. We encountered a playground that the girls really enjoyed. In the video clip D is having a good time with backhoe while the girls are swinging.
On the walk back we spent time on the shore of the San Diego bay. Here's what happens to a jellyfish near the shoreline when the tide drops.... 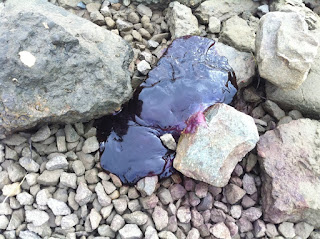 On the way out to the Del Mar race track I wanted try California's version of a taqueria. My choice was Adelberto's Mexican Food since it was actually near our hotel and on the way to the track. The girls decided to try the chicken quesadilla. It looked promising when we saw it...check out the size of this monster. 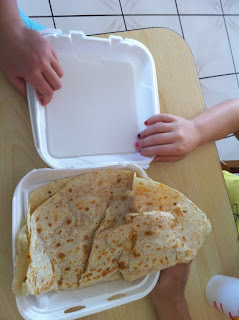 The only problem was that the chicken was not grilled...it was sautéed in tomato sauce - dark and white meat. The girls didn't eat much after tasting/seeing the chicken. D and I split a California burrito and carne asada fries-both of these items are very popular in southern California. 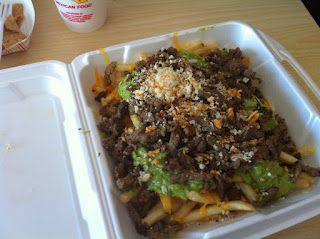 This was too much food...probably a pound+ of french fries, cheddar cheese, guacamole, carne asada and a crumbled mexican white cheese. It was surprisingly good-we just couldn't finish it, especially considering we were also splitting the California burrito. The burrito was the size of a Chipotle burrito (no rice in this burrito, yay!). This burrito was loaded with carne asada, cheddar cheese, french fries and salsa. It was good, too. I did feel bad about the girls, though...they just didn't like the place.
As always the weather here is just amazing. You feel the heat of the sun but the continuous light breeze is like an air conditioner steadily blowing on you. 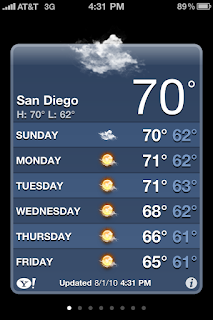 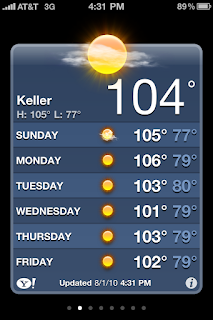 This is the reason why we love San Diego....and this is what we dislike about Keller (Texas). You can see that today was not the exception in either location if you look at the forecast. The low in Keller is significantly higher than the high in San Diego, ugh.
We arrived at the track in time for the first race. Everyone made betting selections through the 5th race....we made winning selections but were slowly losing money since favorites that came in were not returning the money we were betting. 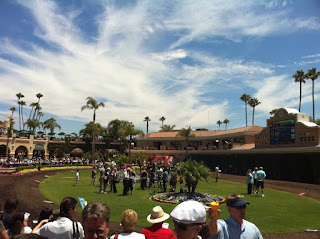 In the paddock prior to the first race 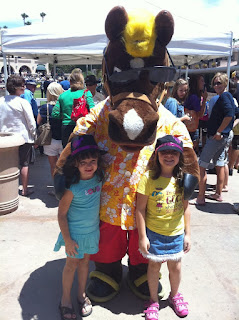 The girls sporting their HM hats at Del Mar 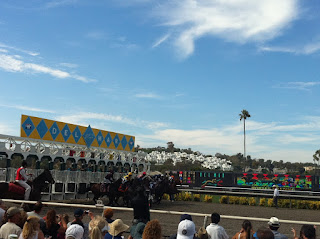 As Trevor Denman the track announcer says...
And away they go.....
Zenyatta, one of my favorite race horses of all-time, is scheduled to run Saturday at Del Mar. I mentioned her on blog two years ago; predicting she would become a superstar.....that was an understatement. She is currently undefeated with a 17 win streak against graded company. She is a very exciting horse to watch run-she's closer which means she runs at the back and charges at the end. Here's her Breeders Cup 2009 race were she took on the boys....
We are considering completely rearranging our schedule to watch her run....this will be probably be her next to last race before retiring.
Posted by ferny at 10:42 AM