Share |
After getting a late start compared to everyone else in our hotel we headed out to Angel Fire. Our hotel is about 24 miles from AF. The road was quite winding and provided for some white knuckle driving, especially with the snow/ice patches. 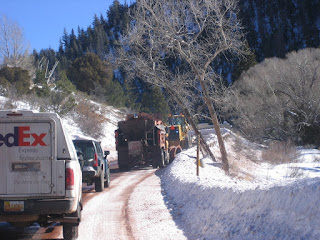 Here we are stuck behind a construction grader
and sanding truck w/ a plow. Yes, that is a
4-wheel drive FedEx truck in front of us
When we arrived in AF we drove straight to the AF Resort to pick up our Polar Coaster tubing passes. The way AF advertises the Polar Coaster is that there are 3 tubing lanes that run about 1000 feet with a surface lift that moves you back to the top. AF sells 50 tickets for each 1.5 hour time slot...more on this later. Parking was tough since this place was packed! We ended parking in the lot furthest from the ski base. Luckily they had shuttles available. Once we got off of the shuttle both girls had to make a bathroom stop. This was a 15 minute deal for Dianna because of all of the outerwear the girls had on. I should emphasize this outerwear was put on right after parking. We still made it to the lift on time. Everyone there soon discovered AF sold about 80 tickets. Why is this a big deal? They only had about 60 tubes which meant there was delay at the top to get someone to give you a tube. There was also a line to get on the surface lift and another line at the top to go down. All of us each took about 8 trips down, so it was a good time. 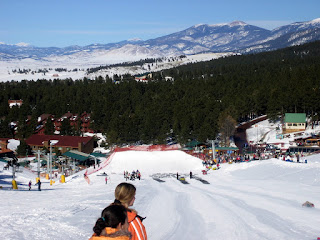 This is the view from the top of Polar Coaster 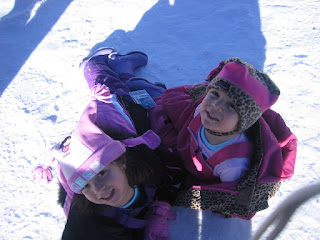 The girls are patiently awaiting the trip down on the tube

M. had a blast and A. was doing great until she decided to go down laying down. There are rubber mats at the bottom of the hill to slow you down...if you happen to put downward pressure on the front edge of the tube as you hit the mats your body continues to move forward while the tube abruptly stops. I know this because I experienced it first-hand on my first trip down. I would pay to have a photo/video of me flipping over about 4 times in a couple of seconds. Anyways, back to A., she did the same thing. Here first comment after her spill was that she was done tubing. I convinced her to try again sitting not laying on the tube. She was spill-free after that. 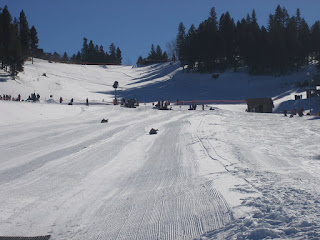 This is M. tubing; she is so adventurous for a 4 yr old 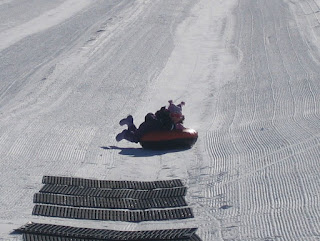 This is A. right before her wipe out 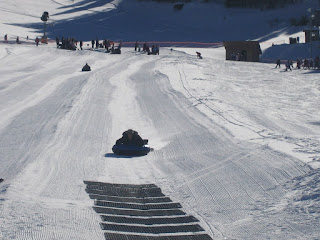 Dianna flying down the hill
Click the youtube link below for the video I took of the ride:


Angel Fire was a different scene compared to Enchanted Forest XC. There were very long lift lines at Angel Fire and it was difficult to walk around, especially among people who don't know how to carry their skis/poles.

After we finished tubing it was time get some snacks so we took the shuttle back to the mini-van. Now it was time to look for a sledding location I read on someone's blog. The blog was not very specific other than sledding hill was next to a condo with tennis courts. We actually found the sledding hill in less than 10 minutes. There were quite a few people sledding and the hill was pretty steep with lots of frozen snow. All of us went down a couple of times before Dianna and I decided this may be too dangerous. On one side of the hill bottom was a frozen pond. We just didn't want to find out how frozen it wasn't. Right next to the sledding hill was a playground. I would say this was the highlight of the trip for the girls, so far. Not that they really played on the playground equipment....they just played in the snow making snow angels, throwing snowballs and just frolicking in the snow. The snow was about 24 inches here. Soon, the sun was going to set so we headed back to Taos to get some food and avoid a night drive on the winding road back. 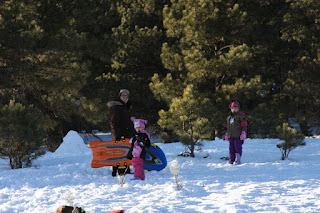 Walking up to the top of hill. This was much cheaper than the
tube ride at Angel Fire (read free) but, there was no surface lift 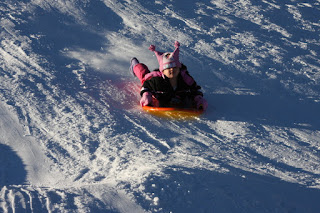 Probably the coolest picture of the trip;
M. is flying down the sled hill. Click to enlarge 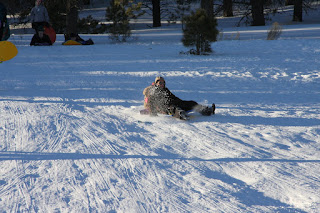 Dianna has her brakes ON (her feet are down and out) 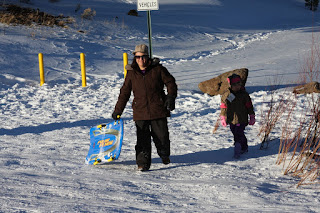 Dianna with her fake, poser smile after a scary sled trip 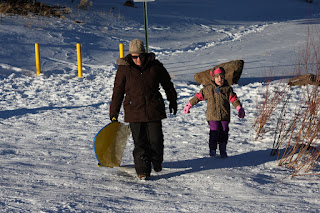 Check out Dianna's expression; this is how she really felt 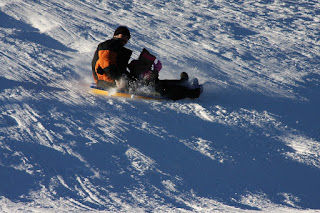 Me and A. speeding down the frozen snow with absolutely no control 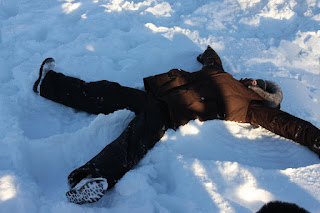 Vacation Trivia Time, choose the correct answer:
1) Did Dianna have too much to drink and pass out?
2) Dianna is trying to imitate M. and A's angel making ?
3) Dianna is preparing for the latest Clapper commercial
(I have fallen and get up, out of the snow) 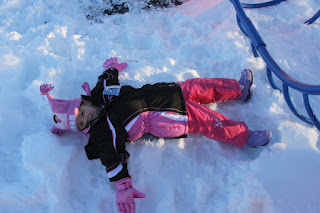 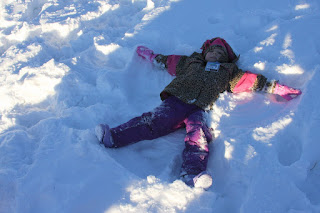 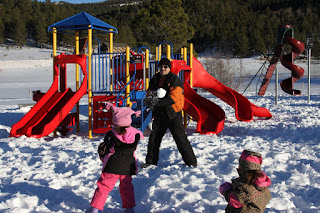 Check out what looks like a big white spot on my jacket...
it's actually a softball-sized snowball M. made and then
threw at me. With aim like that she should pitch
for the Texas Rangers 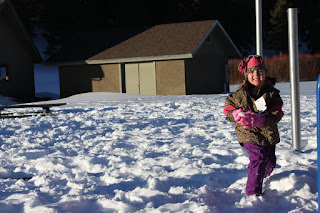 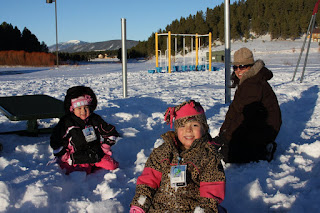 Dianna chose Five Star Burgers for tonight's meal...it was a very good choice. They still had happy hour specials when we arrived which meant half-price draft beer ($1.75 for Bud light) and $1 dollar fries. The girls had the kid's cheeseburger/fries deal. And, for $2.75 it was a good deal. Dianna had an applewood smoked bacon cheddar burger and I tried the Taos burger which was a cheddar burger with a batter fried green chile. The bread was great...it was a butter toasted french roll. The meat was all natural 100% Angus from the Harris Ranch. All around good stuff. The only negative here was the slow service. This was a busy restaurant that was short 1-2 waitstaff but, I would stop by for a burger on my next visit to Taos. 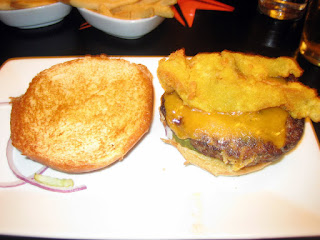 The Five Star Taos burger...I recommend it.
Tomorrow is our last full day before heading back. Vacations just happen way too fast.
Posted by ferny at 9:54 PM