Today was the last day of our winter vacation. After breakfast at the hotel we packed up the minivan and headed up toward Taos Ski Valley for our snowmobile excursion. On the way we stopped at a Mexican import store. Dianna decided she wanted a decorative turtle for one of our flower beds. I picked up some chile seasoning for ground beef. From there we hit detour number two....the Rio Grande Gorge Bridge was only 8 miles so I thought it would be worthwhile drive. Traffic was minimal so I stopped on the middle of the bridge and took these shots: 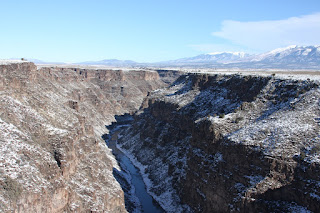 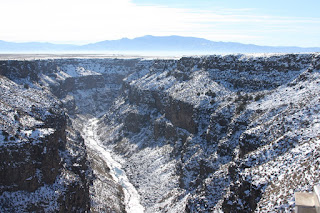 The view south from the Rio Grande Gorge Bridge.

Next stop was Taos Ski Valley. TSV is actually about 24 miles from Taos. The drive there was the most scenic compared to the drives toward Red River and Angel Fire. 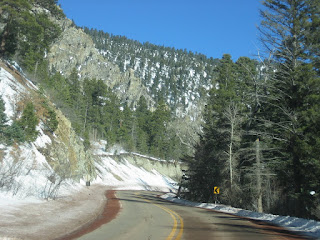 The road from Taos to Taos Ski Valley

TSV was packed...we had to park at the back of the lot furthest from the lift we needed to meet for our snowmobile ride. TSV had an efficient shuttle service but, we kind of felt like cattle...the shuttle consisted of a covered trailer and it was standing room only. We met up at ski lift #1 to sign our release form paperwork from Big Al's TSV Wilderness Adventures. 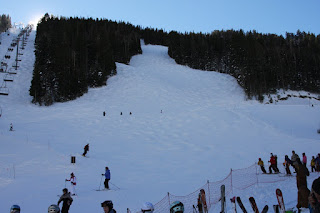 Then we headed back down to parking area to ride Big Al's Popemobile to the trailhead with the snowmobiles...this was a slightly modified Ford 4-wheel drive truck with a large wooden enclosure in the bed that could seat about 10 people. Dianna and all of us actually rode in the cab with Big Al. He was a very interesting character. Even though he has lived in TSV for 25 years he still had a deep Texas drawl. We drove up near the trailhead past many condo's and a few homes....there was actually a sign posted on the way that said "4 wheel drive vehicles only." Big Al had chains on his tires as well. We actually had to walk the last 50 yards to the trailhead since it was inaccessible by vehicle. 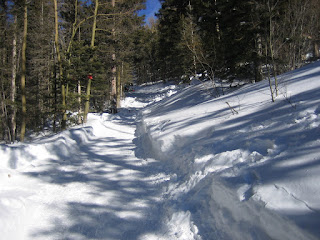 Path to the trailhead where the snowmobiles were waiting

Dianna had never snowmobiled before...I had been on two previous occasions in Park City, Utah. This experience was completely different. The machines we rode looked and drove like they were brand new...they have obviously been very well maintained by Big Al. 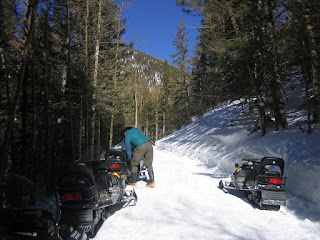 Here is Big Al firing up our sleds...

Big Al spent about 20 minutes on giving basic "how to" instructions....he even quizzed all of us individually. Here we are starting out on the trail: 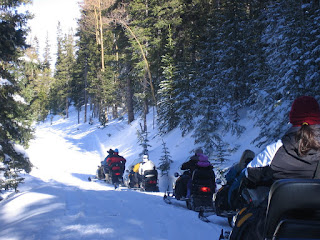 That's Dianna with A wearing the purple toboggan.
M. rode with me.

The scenery was amazing on the way up..... 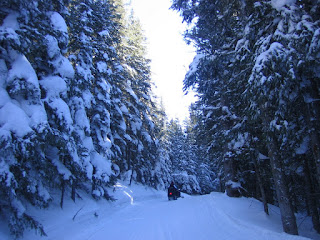 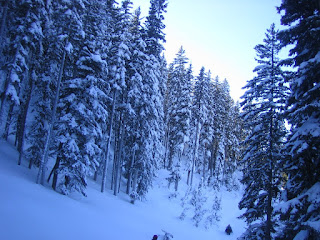 Most of the ride consisted of 8-10 foot path with steep dropoffs. From the picture below I tried to show how steep the dropoff was.... 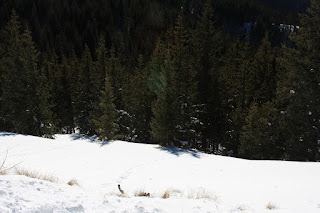 I took a cool self picture of M and me while driving the snowmobile..... 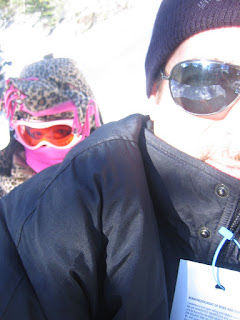 After about 45 minutes we finally peaked out at about 11,400 feet. The view was incredible... 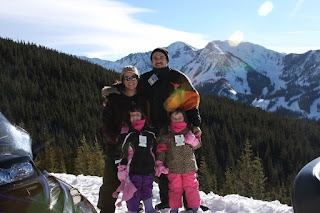 Big Al offered to take this family shot with
Kachina Peak (elev. 12,400) as the backdrop. 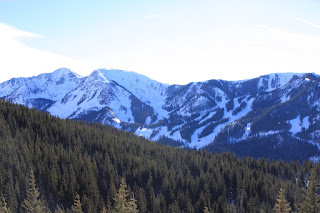 A shot of Kachine Peak...you can see
the ski runs on the back of TSV 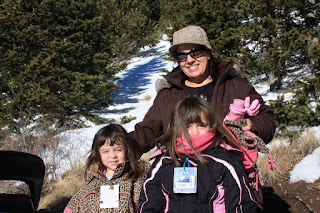 Nice pic of the snow girls... 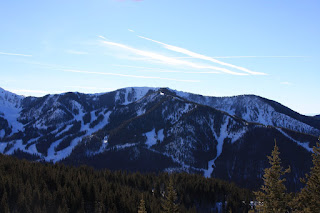 There were contrails (vapour trails) everywhere...

This was our last day in Taos...we stayed in White Rock the last night (same place we stayed on the first night). Before leaving Taos we ate at Pizza Outback. Dianna and I split a large house salad which consisted of greens, sprouts, onions, carrots and purple cabbage. It came with an awesome pesto basil vinaigrette. We also split a monstrous slice of their Bottom Line pizza and a calzone. We both agreed the pizza was better than calzone....in fact, the pizza was very good, but, not as good as Upper Crust in Santa Fe. From there we headed back to White Rock and visited some old family friends until about 10pm.