Share |
We started the day running a little later than I would have liked. We left the hotel at 9am and did not walk through the front gates until 10am (we are only 2 miles from Disney). It took so long because we parked in the biggest parking structure I have seen....not only was it big, we got stuck parking in a spot furthest from the tram that takes you to the front gate. We did not have a choice since all parking was directed/coned through the garage. Now, in the park......after making a quick walk down "Main Street USA" we head into Fantasyland. As we were walking by Sleeping Beauty's Castle, two cast members (aka Disney employees) were handing out Dream Fastpasses. Let me first explain what the Fastpass is.....Disney is crowded, very crowded, Fastpass is an optional service to cut down on your ride wait time. First you go to the ride's Fastpass ticketing machine (not all ride are Fastpass) and get a timestamped ticket that allows you to come back at a specified time range, usually 1-3 hours later, and skip to the front of the line. Many rides at Disney have wait times in excess of 30-60 minutes. The Dream Fastpass' we were given allowed us to jump to the front of the line, immediately! Now, there were times the Fastpass line actually had a short wait of its own but, only a fraction of the regular line. Getting this Dream Fastpass is priceless in Disneyland terms because they don't sell them. They gave these away as a promotion for their "Dream a Million Dreams." 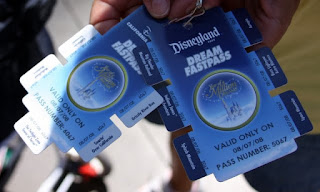 The girls love the kids rides so, our first stops were the "Dumbo the Flying Elephant Ride" and the "Mad Tea Party." 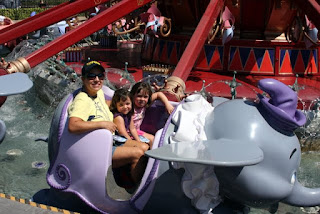 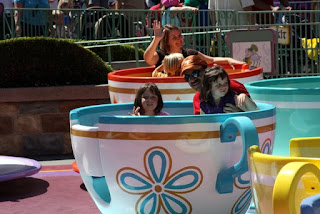 The girls cannot ride solo since Disney has a minimum age of 7 to ride without a "responsible" person. Actually, our first stop was Storybook Land Canal Boats but, that wasn't very interesting to any of us.

Next up we got in line to visit the princess'. This is one of the highlights for the girls...it is also what we have been using "against" the girls when the start acting up for the last 2 months. The threat of not visiting the princess' usually got them to start behaving (please note the use of the word usually). I guess after this visit we are on to the Santa Claus for 'behavorial correction.'

It was hot for this part of S. California...the temp was about 88 degrees. The girls actually were a little bit sweaty, as you can see from the pictures below. Disney has 3 princess out at any given time. The allow time for brief conversations, autograph book signing and photo ops. 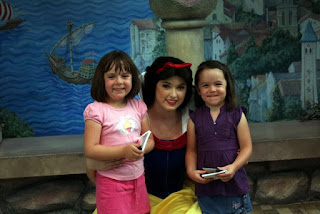 Check out these smiles ! 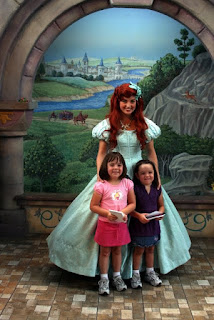 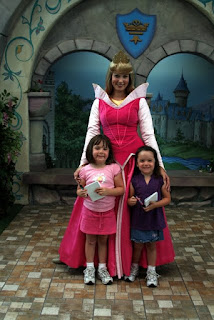 After visiting the princess' there was a 15 minute performance where the girls 'danced' around a may pole with the Cinderella. 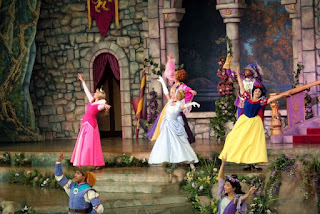 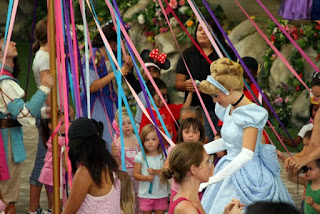 You can see A. to left of Cinderella 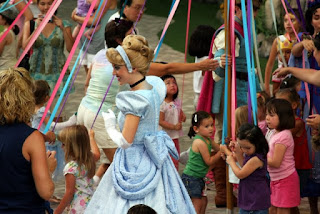 Here they are in the purple & pink

As we left the Fantasyland area of the park we got this shot of us in front of Sleeping Beauty's castle: 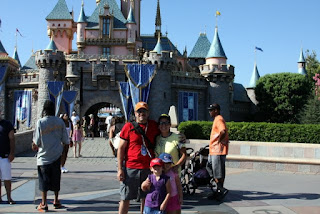 From here we rode Gadget's Go Coaster, a small roller coaster that the girls like. Everyone was hungry after so the girls enjoyed some mac & cheese and Dianna and I had a personal pizza. Food & drinks were about 34 bucks, welcome to Disney.

After eating lunch the girls got a chance to meet Minnie and Pluto: 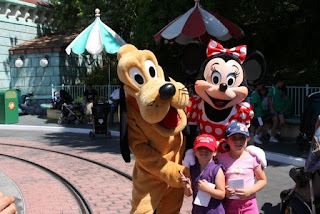 Next up was a tour through Mickey's house to meet Mickey, of course. This was a deceptively long line that took about 30 minutes. Here's the jackpot at the end of the mouse house tour: 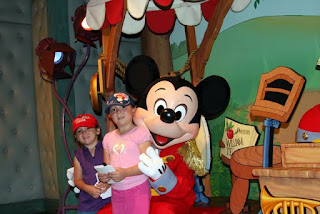 From there, we hit the Roger Rabbit Car Toon Spin ride, not that good for us or girls. Then when rode the Buzz Lightyear Astro Blaster, this one was ok. Aleixs wanted to drive the cars in Autopia. This is ride has been there since I was little. Basically, this are go-karts that go about 4-5 mph around a track. I rode w/ A., she loved this. I think Dianna helped M. quite a bit. I talked Dianna into all of us riding Space Mountain. Bad idea. Very bad idea. Dianna hates roller coasters, bad. And, the ride was bit much for a 3 & 5 year old. The ride is what I consider a mild roller coaster except for it almost pitch black which builds some anxiety not knowing what is coming next. Disney does a good job minor light effects (stars) and music during the ride. The final two rides in Disneyland for the day were Big Thunder Mountain Railroad, a decent coaster that goes through a desert mountain scene, and the Jungle Cruise. Everyone enjoyed both of these. The Jungle Cruise had one of those deceptively long lines. The Jungle Cruise is right next to the Indiana Jones Adventure Ride...Dianna took this photo of me: 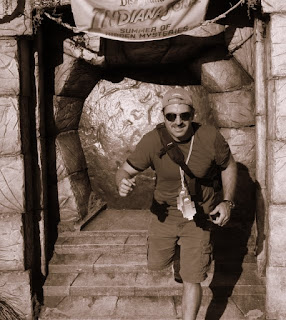 After all of that we crossed over to Disneland's California Adventure park. On our way out of Disney was these two characters: 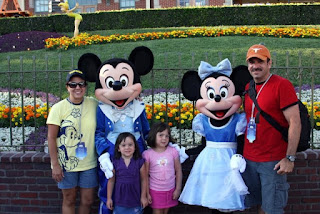 Disney's GAC is an entirely different park right next to Disneyland. Our CityPass ticket included the park hopper option which meant we could go into either park. Here we got in line for Soarin Over California. This turned out to be everyone's favorite ride, by far. It's not so much a physical action ride like the big roller coasters. Instead, this is more like an enormous IMAX type theater with a usual concave screen. You sit in a carriage that has 10 rows of seats. This carriage is on a cantilever system that lifts you up about 25 feet into the screen, to the point where the only thing you can see is the screen, even with your peripheral vision. Then a short 4 1/2 minute movie starts with a flyover of the following California scenes: San Francisco (Golden Gate brdige), Redwood Creek, Napa Valley, Monterey, Lake Tahoe, Yosemite National Park, over the golf course at PGA West (La Quinta), Camarillo, Anza-Borrego Desert State Park, San Diego, Malibu and Los Angeles. The ride ends with a flight over Disneyland at Christmas, with a Christmas parade traveling down Main Street, U.S.A., decorations on Sleeping Beauty Castle, and fireworks. Several of the scenes have scented air blown in that corresponds to the film imagery. For example, the Redwook Creek scene the air smells like pine and the scene with the orange grove smells like, you guessed it, oranges. The music score is also fantastic.

At the end of our first day at Disney this is how the girls felt: 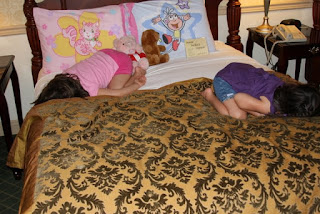